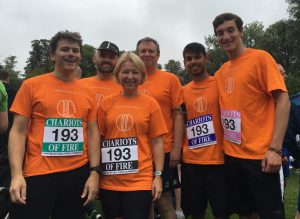 Speaking afterwards, Tim Evans commented, “I’ve run the race since 1994, and the atmosphere was brilliant, with lots of spectators and a great route through the streets and colleges of Cambridge. The main thing is that thanks to the team’s great effort we raised £110 for a wonderful charity – we’ll be back next year for sure!”

For 2017 CID plans to use a combination of its 3D printer and industrial design skills to create a new, more ergonomic version of the standard baton, in an attempt to run even faster.

“We’ve been looking at the baton and design-wise it can definitely be improved,” added Alex Jones, director, Cambridge Industrial Design. “We’ll be spending the next twelve months analysing its strengths and weaknesses and aim to debut a new, more ergonomic version at next year’s race.”